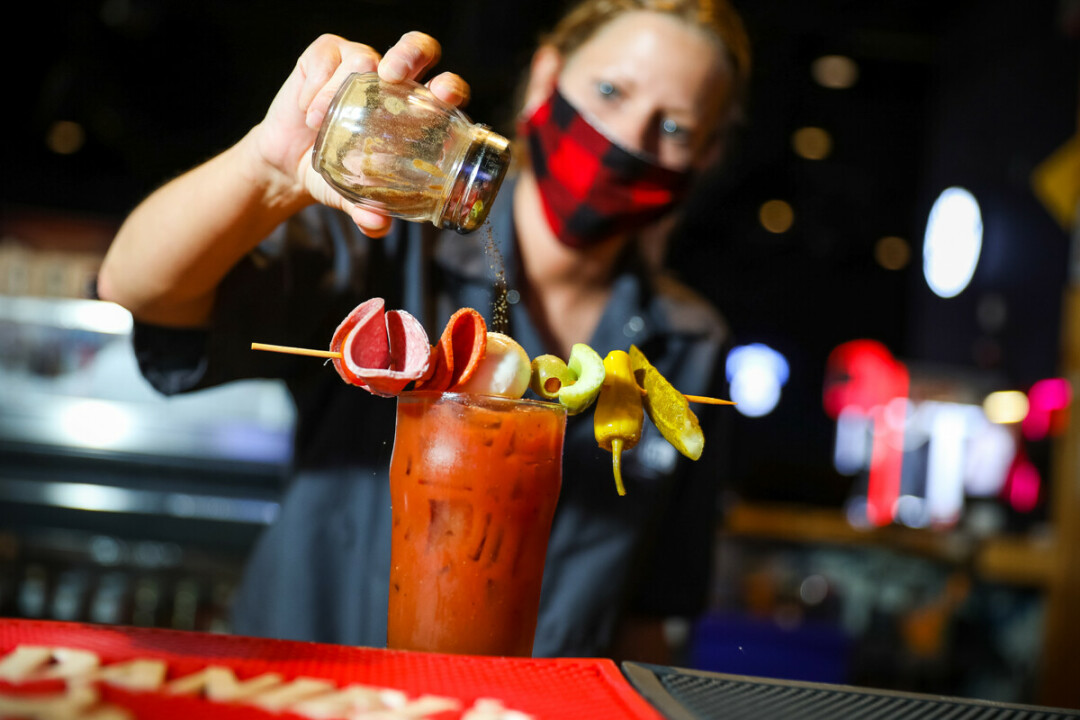 A bartender prepared a drink while wearing a face mask at Menomonie's Stout Craft Co. in this July photo.

Declaring that a statewide surge in COVID-19 cases amounted to an immediate crisis, Wisconsin Gov. Tony Evers directed his administration to restrict the size of public gatherings – including at stores, restaurants, and taverns – to 25% of a building’s capacity.

The order, issued Tuesday by Department of Health Services Secretary Andrea Palm, goes into effect at 8am Thursday, Oct. 8, and expires Friday, Nov. 6. According to the governor’s office, the rule “applies to any gatherings at locations that are open to the public such as stores, restaurants, and other businesses that allow public entry, as well as spaces with ticketed events.”

The order was issued as the state reached a total of 136,379 confirmed coronavirus cases – 2,020 of them reported Tuesday alone. The seven-day average of new cases was 2,346 each day, an increase from just 836 a month ago, the governor’s office state. Overall, 1,399 Wisconsinites have died as a result of the coronavirus – including 99 in the past week.

“We’re in a crisis right now and need to immediately change our behavior to save lives,” Evers said. “We are continuing to experience a surge in cases and many of our hospitals are overwhelmed, and I believe limiting indoor public gatherings will help slow the spread of this virus. Folks, we need your help and we need all Wisconsinites to work together during this difficult time. The sooner we get control of this virus, the sooner our economy, communities, and state can bounce back.”

“We are continuing to experience a surge in cases and many of our hospitals are overwhelmed, and I believe limiting indoor public gatherings will help slow the spread of this virus."

Palm added: “The unfortunate reality is this: the disease activity level of COVID-19 in Wisconsin is so high that going to a gathering puts you at very high risk of exposure. We know gatherings are a key way this virus spreads, so we must act to limit indoor gatherings to stop the spread, reduce illness, and save lives.”

Evers’ administration acknowledged that they expect litigation over the latest order, as they did in May, when the state Supreme Court threw out Evers’ statewide stay-at-home order after a lawsuit by Republicans. Ryan Nilsestuen, an attorney for Evers, told the Milwaukee Journal Sentinel that “the administration believes the order is lawful because the new order sets restrictions allowed under a different portion of state law than the May state Supreme Court ruling addressed.” The newspaper reported:

“Already there is a lawsuit over the extent of the Democratic governor’s powers to deal with health emergencies. That lawsuit, backed by Republican lawmakers, could result in tossing out a mask order Evers issued this summer.

“A judge is expected to rule any day in that case. Senate Majority Leader Scott Fitzgerald, R-Juneau, this week said Republicans who control the Legislature don’t have a plan to address COVID-19 but would work on one if the case goes their way.”

The order drew criticism from the Wisconsin Restaurant Association, which said on its website that it “will continue to communicate to state leaders about the devastating effects that these types of limitations will have on restaurant businesses and will lobby to eliminate restrictions as soon as possible using data to show that restaurants using best practices are not the cause of COVID-19 cases.”

Meanwhile, the new order was praised by the Wisconsin Medical Society. “The Society supports the Department of Health Services’ action to temporarily limit indoor public gatherings, because the state simply must halt its current trajectory. We want to continue being the state leading the country in high-quality health care, not having one of the highest COVID-19 infection rates in the country.”