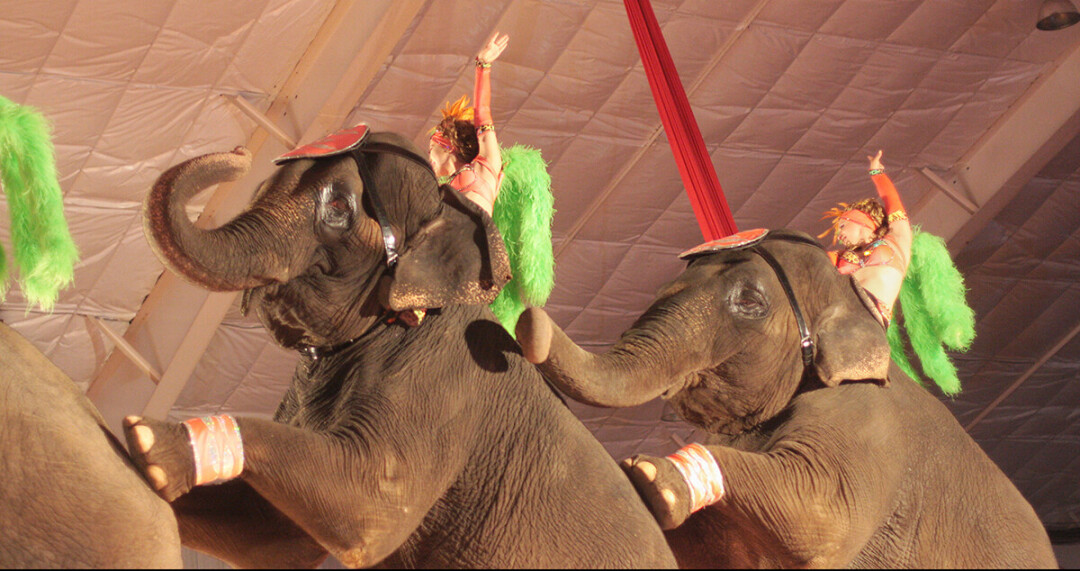 The escape of a circus elephant in Menomonie back in 2002 is one of the incidents that prompted travel website Thrillist to dub Menomonie "the Twilight Zone of Weird News." (These elephants, from a Menomonie performance in 2010, didn't escape ... at least we don't think they did.)

The city of Menomonie recently caught the eye of an online travel and entertainment magazine, and not because of its award-winning university, its picturesque and historic downtown arts center, or the fact its waterpark shares a name with the fictional African home of the Black Panther.

No, this western Wisconsin city thrilled the folks at Thrillist because it’s apparently been a vortex of weird news over the years. Under the headline “This Adorable Midwest Town Is Like the Twilight Zone of Weird News,” the June 18 article by Janelle Lassalle recounts a number of odd occurrences that attracted the national media spotlight to Menomonie, including the escape of a circus elephant, the so-called “Smiley Face Bomber,” the theft of Star Wars film reels, and the robbery of the Kraft State Bank.

“Menomonie seems prone to the wild and bizarre, a place whose mix of wholesome and strange comes off as a cross between Eerie, Indiana; Twin Peaks; and Gravity Falls.” –Thrillist.com

While the fact these events occurred in 2002, 2002, 1999, and 1932, respectively, might blunt the article’s suggestion that Menomonie is “America’s weird news capital,” it’s still nice to get the attention of an online publication with 5.5 million Facebook followers. (The only “weird” stories cited from the past decade is the 2019 arrest of a guy who tried to parachute from a 300-foot transmission tower.)

Surprisingly, the article leaves out one of the stranger Menomonie headlines of the current millennium: The June 2002 theft of a 400-pound fiberglass moose from town’s Moose Lodge. At the time, that particular bizarre news item caught the attention of the popular Canadian radio news program As It Happens, which subsequently used Menomonie as a geographic reference point for oddball American stories. (Hey, Canadians love their moose!)

The Thrillist article notes that British writer (and erstwhile Dunn County resident) Neil Gaiman drew inspiration for his fantasy novel American Gods from the Midwest in general and the Menomonie area in particular, which certainly burnishes Menomonie’s quirky cred.

“Menomonie seems prone to the wild and bizarre,” Lassalle writes, “a place whose mix of wholesome and strange comes off as a cross between Eerie, Indiana; Twin Peaks; and Gravity Falls.” She goes on to mention some of Menomonie’s less-quirky (but nonetheless cool) points of interest, including Brewery Nonic and Zymurgy Brewing.