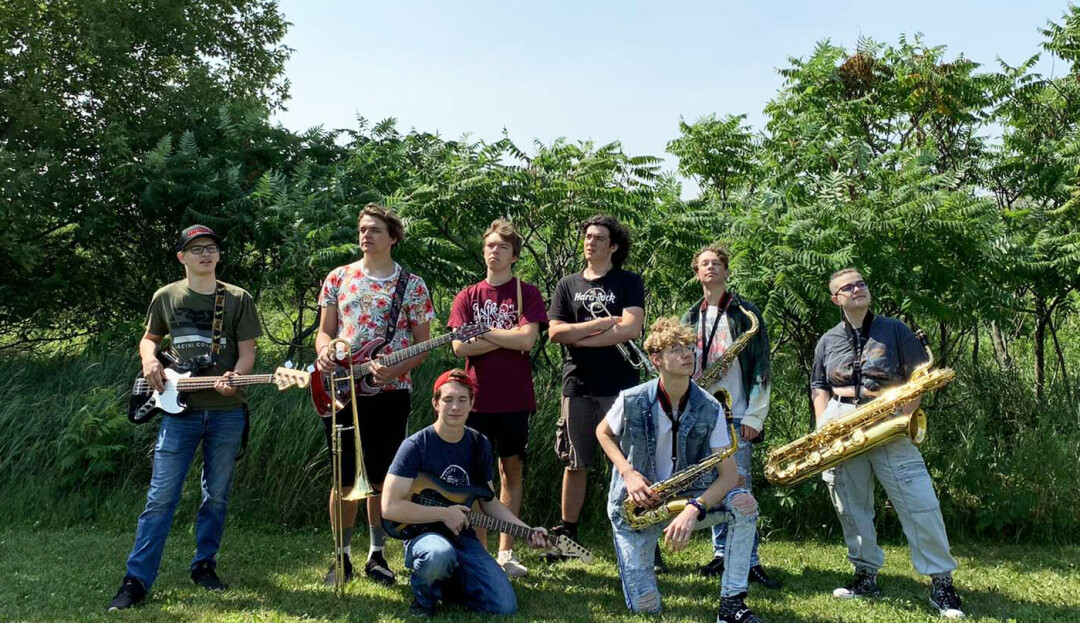 SUMMER SHOWCASE. Each top 10 Rockonsin act – including Conrad & the Comrades (above) – will perform for 20 minutes at Summerfest as part of the final portion of the competition. (Submitted photo)

Conrad & the Comrades, a brass rock band from Chippewa Falls High School, and Ember Sky, a rock outfit with members from Chi-Hi and Chippewa Falls Middle School, are among the top 10 finalists in the annual Rockonsin competition. With their top 10 placement, they will both play a 20-minute showcase at Summerfest in Milwaukee on Saturday, June 25.

“Come join us at The Big Gig to see these 10 talented statewide garage bands rock the Summerfest stage showcasing their love of music and performance and cheer on these young musicians as they shine in the spotlight when they perform at The World’s Largest Music Festival,” said Rockonsin Founder and Producer Dennis Graham.

The 2022 Rockonsin State Finals will be June 24-25 at Summerfest from noon to 2:30 pm each day on the Johnson Controls World Sound Stage. Ten statewide garage bands representing Wisconsin high schools and middle schools from Ashland to Muskego and Chippewa Falls to Cedarburg and in between have been selected by three music industry judges to perform at the ROCKONSIN State Finals.

The 2022 winning and runner-up bands will be announced at 6pm on Saturday, June 25, on Facebook, Instagram, and Tik-Tok (@rockonsin).

Each of the bands will be evaluated by a different set of three music industry judges on expression/creativity/technique, rhythm/vocals, primary beats/blend/time, synergy, and a summary of each musician knowing their role and how the band jells as one musical unit. Each band, after their Summerfest performance, will receive a private verbal critique from one of the judges.

The 2022 Rockonsin winning and runner-up bands will each perform a second 40-minute showcase gig at The Big Gig on the Briggs & Stratton Big Backyard Stage on July 8, with the runner-up hitting the stage at 2pm followed by the winning band at 2:50pm.

The winner and runner-up each win a professional recording session at Madison’s Blast House Studios (Winner: 12 hours; Runner-up: 8 hours).  Each of the 10 State Finalist bands receives two Shure microphones (one vocal and one instrument with cords).  The winning band will also receive a Shure wireless vocal microphone system.