10 Years
in the
Chippewa
Valley

A Couple Taking Historic Renovation to a New Level,
Mixing the City's Past With an Urban Flair

John Mogensen and Lisa Aspenson are partners in both business and life, and it’s clear from the buildings they own that they have a passion for Eau Claire’s history and modern metropolitan trends – paradoxical concepts that they almost always fuse together in their business ventures. 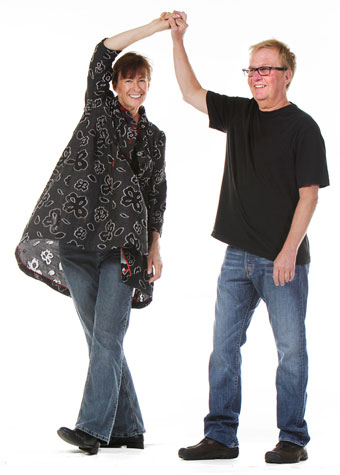 The Eau Claire natives own loads of buildings and properties – many of them historical spots in our city center – and many that they’ve preserved even though it often costs more and takes more time to renovate the old than to build the new. They have literally renovated more than 100 Eau Claire properties, and own more than 300 parcels. Their “empire” (of sorts) began with restaurants, first on Water Street with Mona Lisa’s and Mogie’s, and then 10 years ago they spread downtown with Stella Blues, followed by The Red Room and The Livery. With each they’ve brought distinct niches in food (local Mediterranean, comfort Cajun, quality burgers, and out-of-the-ordinary pub fare) combined with a wide variety of drinks and a décor that mixes local historical with modern chic.

You never know what they have up their sleeves, but you can be sure it’s something because these two never seem to sleep. And they love to tease us about it, even during the photo shoot when we asked about the plans for the famed 2 South Barstow building. “We don’t know. We’re still thinking about it. If all else fails, maybe we’ll open another restaurant,” John joked with a smile. “No,” Lisa jumped in, not even interested in playing along. “Maybe it’ll be a pizza place. Yeah. John’s Pizza,” John again joked, then continued in total seriousness, “but don’t print anything.”

All that said, John and Lisa could be considered divisive figures, as some appear to resent the fact that they own so much, change old places they once loved, take too long to complete projects, or that they’re simply “landlords.” But with how much they’ve done for Eau Claire, the only viable reason to be upset is that we don’t have more people like them. More developers willing to protect our history, invest in aesthetics, and create new destinations for the Chippewa Valley.