Having made tour stops in Tel Aviv, Budapest and São Paulo, the Minneapolis-based band Davina & The Vagabonds certainly has lived up to its name. The retro-infused, jazz-meets-blues outfit was founded in 2006 and steadily has won fans around the globe. So, why is it only now releasing Sugar Drops (Red House), its first album recorded in a world-class studio? “I’m very cheap,” lead singer Davina Lozier quipped. “But also, we have cut seven albums. I made the Billboard Blues chart with my last one, Sunshine. So, I guess we just didn’t need it until now.” The group is centered around Lozier and her husband, trumpeter Zack Lozier. They decided together to make the new album at Nashville’s Compass Studios. “This was really out-of-the-box for me,” the singer admitted. “Doing this would mean less control for me. But I fell in love with the piano. The vibe was nice.” Some of Nashville’s best session players were recruited for the project, including trombonist Roland Barber and organist Reese Wynans. “Those guys latched onto every nuance we were trying to get,” Zack Lozier said of the top-shelf collaborators. “On ‘Magic Kisses,’ for example, I’d developed my trumpet parts, but I didn’t have anything for the trombone. Roland came up with all the trombone parts. That just made the tune.” 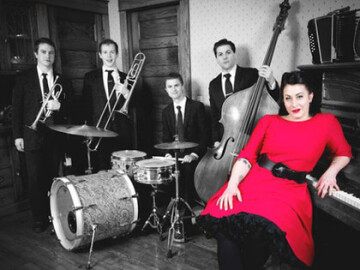