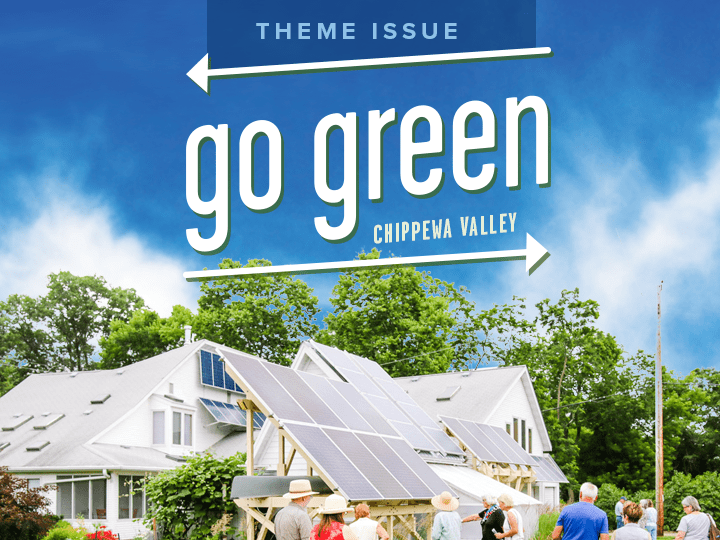 In the United States, 30 to 40% of food goes to waste, according to the U.S. Department of Agriculture.

“It’s crazy, the amount of waste that we generate,” said Zacharious Pappas, the co-owner of Earthbound Environmental Solutions, a local waste management company.

Many individuals around the country have opted to follow a “zero-waste lifestyle,” or a way of life dedicated to eliminating any kind of waste. But, there’s one problem: it’s incredibly difficult to be zero-waste in a world where plastic and fossil fuels dominate nearly every aspect of life.

“The name ‘zero waste’ has me concerned,” said Marnie Keilholz, the owner and designer of House Blend Lighting and Design in Chippewa Falls. “If it seems hard, people don’t do it.”

“We only have one earth. And it’s a big place, but it is finite.” – Bill Korb

Rather than changing everything about their lifestyles, sustainability advocates around the Chippewa Valley shared one piece of advice: less is more. Cutting back on waste is a step in the right direction.

“I’m practical,” said local hobby beekeeper Bill Korb. “I’m pragmatic. … Obviously I’m not advocating that we go back to the Stone Age and live the way our progenitors did. … We can have the society that we have, and we can still have nice things, and we can still continue to advance. We just have to be responsible with the way that we do that.”

“I honestly encourage people to start with food,” Keilholz said. “When you’re feeling healthy, you want the environment to be healthy.”

There are other ways to cut back on food waste, too.

Arthur Kneeland, the faculty advisor of the student sustainability organization GreenSense at UW-Stout, said he chooses groceries that likely no one else will want so they won’t go to waste.

“Since I am going to cook it in an hour, I know it will be good enough,” Kneeland said. “That way, the grocery store hopefully throws away less food.”

Knowing what to do with food waste is also critical, said Ellen Terwilliger, an Eau Claire resident. The answer comes in the form of composting.

Composting involves a nitrogen and carbon element, Terwilliger said. Sources of nitrogen include kitchen waste and green clippings, and the carbons include dried materials and dead leaves. Combine at a 1:2 nitrogen to carbon ratio, turn it occasionally, and in about three months to a year, it will be the perfect fertilizer for a garden.

For individuals who don’t have the outdoor space to compost, Terwilliger recommends Earthbound, which specializes in compost collection.

“It’s a movement; it’s not a service,” Pappas said. “It’s just a complement to peoples’ lifestyle. People want to be sustainable.” Sustainability doesn’t stop with food waste; being sustainable also means considering energy waste. The Terwilligers use solar panels to power their home with the goal of creating as much energy as they use. They also use a geothermal system to heat their home to eliminate fossil fuel or natural gas use.

“The geothermal is basically tapping into the fact that the Earth – if you go down eight feet below ground here in northern Wisconsin – it’s 55 degrees, and it stays 55 degrees year-round,” said Steve Terwilliger, a professor emeritus of art at UW-Eau Claire. “So, basically, during the winter, the house is heated by the temperature of the Earth.”

And, it works more effectively, Terwilliger said. “It’s very even,” he said. “You don’t have that sort of blast of warm and then cooling down, blast. It just stays even temperature year round.”

Jan Erdman and her family, Menomonie residents, began their journey with renewable energy 45 years ago when they used hand tools to build their first house in Tomah. In addition to their solar panels and Wind Power-brand wind turbine from the 1930s, they also drive an all-electric car, a 2013 Nissan Leaf.

Korb also drives all-electric in a Model 3 Tesla and has a home with solar panels. He said studies show electric vehicles, such as his Tesla, cost less money in the long run over gasoline-powered vehicles. They’re also more eco-friendly.

“Between my solar panels and the three hydro plants that are within 10 miles of my house, I’m guessing that my electric car is mostly running on renewable energy,” Korb said.

But living a low-waste lifestyle doesn’t have to mean investing in solar panels or installing geothermal heating. Lauren Becker, director of the Student Office of Sustainability at UW-Eau Claire, offered easy steps to cut back on waste: use bar soaps, use powder toothpaste, swap out for a compostable toothbrush, use cloth napkins, take advantage of natural light, use reusable water bottles, take shorter showers, wash clothes in cold water, bring reusable bags to the grocery store, compost, and – above all – reuse.

“We only have one Earth,” Korb said. “And it’s a big place, but it is finite. Sooner or later things are going to run out if we’re not careful about how we use them. And so it’s really important that we – every one of us – do what we can to make sure that this place is better when we leave it than it was when we got here.”