The Mark Healey and Jim Schuh Duo formed in 2015. Mark and Jim each began playing music during the mid-1960s. Mark has been in the world famous band Badfinger since 1986, and recently released his CD Inside Out that is getting airplay in 55 countries. Jim played in his band Schuh Fly from 2012 to 2019, but before that he was in a dozen bands including the American Tea Company that had a #1 hit on the local radio. As a duo Mark and Jim perform a variety of classic rock songs. Artists covered include Badfinger, Beatles, Bob Dylan, Everly Brothers, Buddy Holly, Rolling Stones and many more. Visit our Facebook page at: https://www.facebook.com/MarkHealeyandJimSchuhDuo 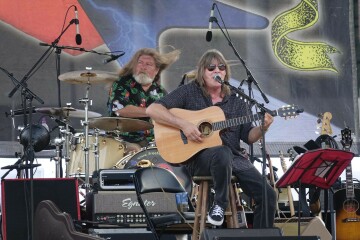