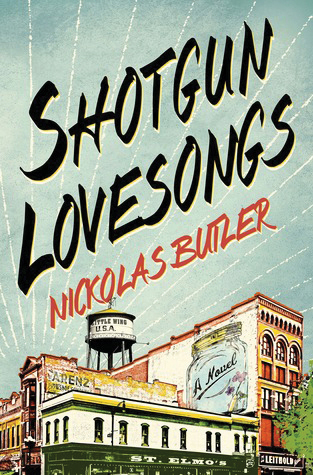 Since Eau Claire native Nick Butler debuted Shotgun Lovesongs at V1 headquarters in March, he has won two prestigious awards and racked up miles on tour in the Midwest. We caught up with Nick by phone on his recent whirl through upper Michigan, where he revealed that a director has been signed for Fox Searchlight’s big-screen version of the film – although he can’t yet reveal who it is. The screenplay will be penned by Brad Desch (who also wrote a film, Fathers and Daughters, now in production and starring Russell Crowe). Shotgun Lovesongs is the coming of thirties-to-middle-age story of five characters bound by the roots of that place called home, a fictional town called Little Wing, just south of Eau Claire. No wonder Shotgun Lovesongs has won the Great Lakes, Great Read 2014 award in the adult fiction category by the Great Lakes Independent Booksellers Association (GLIBA) and the 2014 Booksellers Choice award in the fiction category by the Midwest Independent Booksellers Association (MIBA). “Shotgun Lovesongs was such a natural choice. It’s a love song in its own right. A love song to the Heartland – to its unforgiving and knowable seasons; to its hills and dunes and farmlands; to its Great Lakes, and to its small lakes, too,” said Katie Capaldi, GLIBA member. Another GLIBA member Karin Beyer wrote in an email: “Nick is an amazing, talented writer and person who will leave his footprint in literature.” MIBA’s executive director Carrie Obry, located in Golden Valley, Minn., said the novel struck a chord with her members because it’s an excellent novel whose characters are relatable. “You feel like you grew up with them,” she said in a phone interview. “He captured that essence of a small town … on whether or not it can offer enough to keep you there while also showing how meaningful it is to live in a place that means so much to you.”