Chippewa Falls High School will present its Annual Musical February 18th, 19th, and 20th 2022. This year’s production marks the 50th Anniversary of the Annual Chippewa Falls High School Musical and to celebrate we are returning to the very first show ever presented by the school – a musical considered to be one of the greatest musicals of all time: Lerner and Lowe’s “My Fair Lady.” Based on George Bernard Shaw’s play Pygmalion, My Fair Lady is that rare musical by which all others are measured. The tale of a cockney flower girl transformed into an elegant lady features one of musical theatre’s greatest scores, including: “Wouldn’t It Be Loverly?,” “With a Little Bit of Luck,” “The Rain in Spain,” “I Could Have Danced All Night,” “On the Street Where You Live,” “Get Me to the Church on Time,” and “I’ve Grown Accustomed to Her Face.” Eliza Doolittle is a young flower seller with an unmistakable Cockney accent which keeps her in the lower rungs of Edwardian society. When Professor Henry Higgins tries to teach her how to speak like a proper lady, an unlikely friendship begins to flourish. 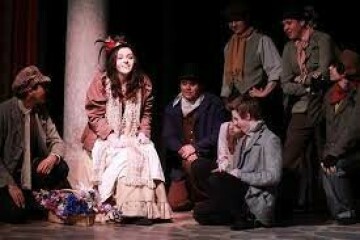