The Amazing Kreskin lets the audience hide his performance fee and if he doesn't find it he doesn't get paid.

Audience members on stage will have a ghost sighting of spirits that haunt the Mabel Tainter.

The late Phyllis Diller said," You must see Elvis, Sinatra and a Amazing Kreskin show once in your life. He's truly amazing but I think he's a witch and should be burnt at a stake!"

Kreskin is not a magician but truly the world's greatest mentalist for more than 6 decades. During his show he tells people things about themselves that only "they" could possibly know like their social security number, a street address from 20 years ago, their dogs name, the name of a childhood friend etc. The longer he's on stage the more he taps into what his audience is thinking.

Amazing Kreskin offers $1,000,000.00 to anyone who can prove he uses an electronic device or special paid secret assistants to perform the "mentalist effects" in his show. 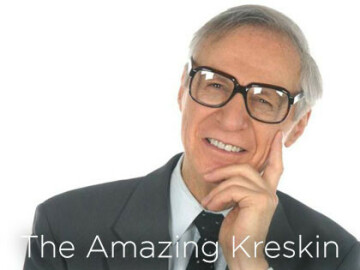