The Forum Series at UW-Eau Claire will be hosting Andrew Yang followed by a question and answer with a virtual reception to close.

Andrew Yang is an author and entrepreneur who, in 2011, founded Venture for America, a nonprofit that created thousands of jobs in Detroit, Cleveland, Pittsburgh, Baltimore, and other cities throughout the country. In his bestselling book, "The War on Normal People," he explains the mounting crisis of the automation of labor and makes the case for the Freedom Dividend, a Universal Basic Income of $1,000 a month for every American, along with hundreds of other policies to put Humanity First. Andrew was named a Presidential Ambassador of Entrepreneurship by the White House under the Obama administration and a Champion of Change for his work with Venture for America. His run for President in 2020 brought a bold vision for a trickle-up economy and the power of investing in American families.

$5 or FREE for UWEC students and faculty 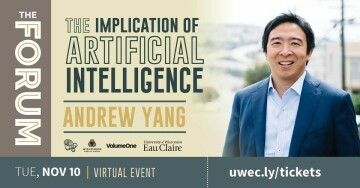