A night of stand up comedy and hilarious songs!  Headlining are Ellie Hino and Casey Nelson - with catchy songs and honest stories offering a glimpse into life as a married couple. Their 4 year old son is already sick of their shtick. Also featuring  is Jamie Shriner - a Chicago-based comedian with a sweet and soulful singing voice and a blunt point of view. Jamie has also written for The Onion. 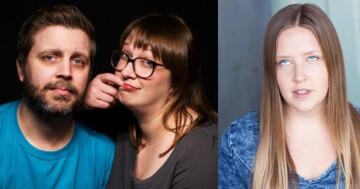