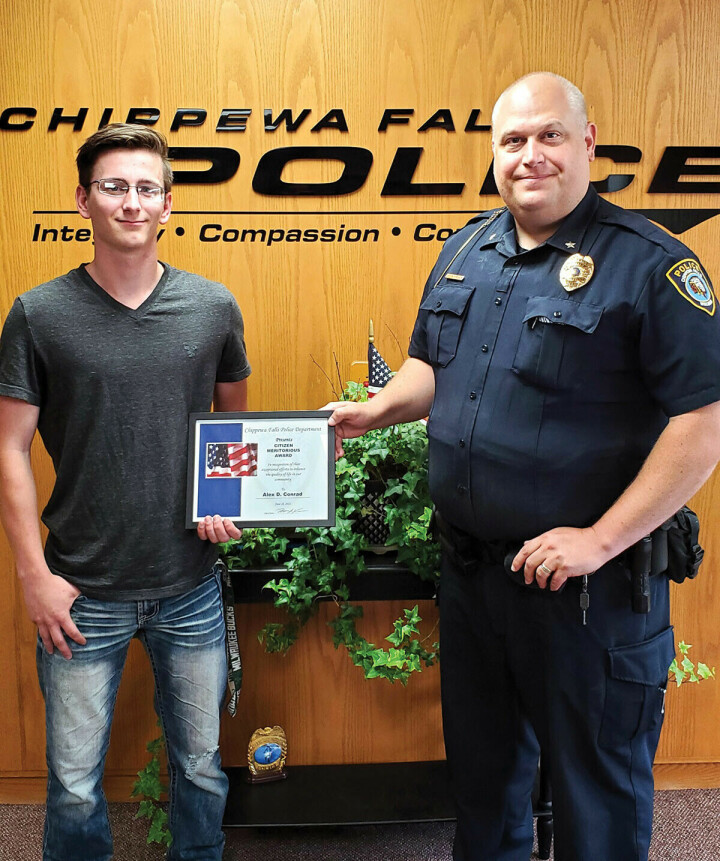 Earlier this year, Alex Conrad drove his car across the Main Street Bridge in downtown Chippewa Falls – just like he would on any other ordinary night. But as he made the crossing, something unusual caught his attention: Someone was standing near one of the railings.

Flooded with uncertainty, he decided to turn around to make certain the person was alright. As he rolled back onto the bridge, Conrad realized the person standing near the edge was contemplating taking their own life. Little did he know, but Conrad was about to save it.

Now, a year later, the Chippewa Falls Police Department has awarded Conrad the Citizen Meritorious Award for his act of heroism.

“(Conrad’s) quick thinking, compassion, and initiative that day surely saved the life of a person in mental crisis,” said the Chippewa Falls Police Department in a social media post the day Conrad received the Citizen’s Meritorious Award, which recognizes citizens’ exceptional efforts to enhance the quality of life in Chippewa Valley.

Don’t ignore your feelings. That can be as simple as picking up the phone and reporting what you saw, or intervening if you feel you safely can. Just don’t walk away and forget. You could save a life.

“It is an important honor,” said Chippewa Falls Police Chief Matthew Kelm. “It is a small way that we as police officers can show how much we appreciate our community members who go above and beyond for their fellow citizens.”

With hopes to draw the attention of passersby, Conrad had positioned his car diagonally on the bridge before coming to a halt. He bravely stepped out of the car and approached the person – first speaking with them, and eventually embracing the person in his arms to comfort them while the police were in route to the scene.

Because of Conrad’s quick decision making, the police arrived in time to connect the individual to the mental health resources they needed.

Kelm hopes more people in the community will learn from Conrad’s bravery and take action when something doesn’t feel right.

“Don’t ignore your feelings,” he said. “That can be as simple as picking up the phone and reporting what you saw or intervening if you feel you safely can. Just don’t walk away and forget. You could save a life.”