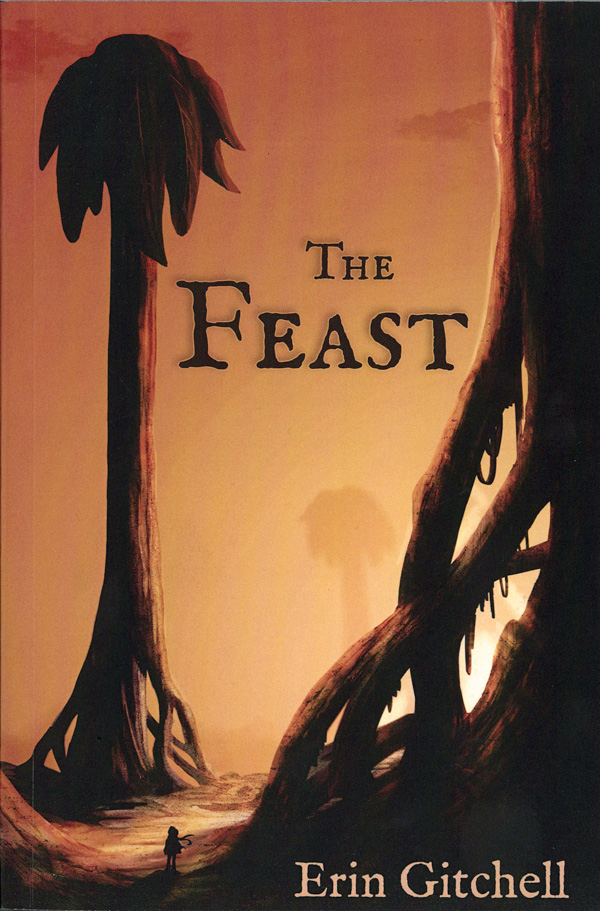 Epic fantasy isn’t an easy genre for a new writer to break into. There’s competition from the classics, penned by Oxford gentlemen and loved across generations, and then there are the new, heavy-as-a-brick tomes that fans wait breathlessly for, only to devour in one ecstatic sitting.

The Chippewa Valley now has its own epic fantasy author to call our own and if she’s feeling the competition, she hasn’t let it dampen her doggedness. Erin Gitchell has just published her first book, The Feast, with the help of a Kickstarter campaign, and is already at work on the sequel.

“I actually borrowed the idea from my husband, (an independent game designer),” she said. Gitchell had been feeling the pressure of trying to write while working and having a family, so with the support of her friends and family she decided to launch a Kickstarter campaign last year to raise enough money to take six weeks from her job at the Menomonie Public Library and write full time.

It’s rare to find such a supportive work environment, but Gitchell’s director and co-workers were excited for her to take the time to finish her novel. Before the Kickstarter campaign, Gitchell struggled to carve out writing time between work and the responsibility of family.

“I wrote whenever I could, and whenever I was motivated to,” she said. “But when I would get the time to write, all I could think about were all those other things I should be doing.”

The idea for The Feast originated when Gitchell was doing homework in grad school. She felt compelled to pen a scene about a girl who had been turned into a horse by a sorcerer who had just murdered her family.

“The whole story stemmed from that scene,” she said.

“When you do it by yourself you have to learn from your mistakes. I do like doing it this way. You have total freedom, and self publishing has gone from being viewed as almost selfish to being an option for everyone.” –Erin Gitchell, on self-publishing her epic fantasy novel, The Feast

The idea wouldn’t leave her, so Gitchell spent the next two and a half years chipping away at it when she could, reaching 50,000 words and finally finishing it in those precious six weeks.

During those two and a half years she also experimented with some writing in the horror genre. “It’s scary where your mind can go,” she said with a laugh. Fantasy is her abiding passion, despite the thrills that horror provides. “I just really like putting myself in those worlds. It’s fun for me.”

What’s perhaps not as fun are the nuts and bolts of self-publishing.

“When you do it by yourself you have to learn from your mistakes,” Gitchell said, acknowledging the difficulties of being her own promoter and publisher. “I do like doing it this way. You have total freedom, and self publishing has gone from being viewed as almost selfish to being an option for everyone.”

Indeed, Gitchell is the perfect example of an everyman writer. The Kickstarter campaign provided her with a month and a -half to write full-time, but the benefits have extended beyond that short time period. “It was really comforting to know that I had that time. It built my confidence and taught me how to make time for my writing.”

Now, Gitchell wakes up at 3am, penning her tales in the dim light of early morning. “It works pretty well,” she said. “I write for two or three hours, and it gives me some time for myself. I don’t feel guilty, because everyone else is asleep. Most importantly, I have time to write.”

Gitchell’s not been discovered by a major publisher (yet), and she’s still working hard to promote her novel in the Midwest, but her devotion and loyalty to the integrity and power of her stories are on an epic scale all their own: “I can’t not write; it’s that simple.”

To learn more about Erin Gitchell’s work and to purchase a copy of The Feast, visit eringitchell.com.