Whose job is that? 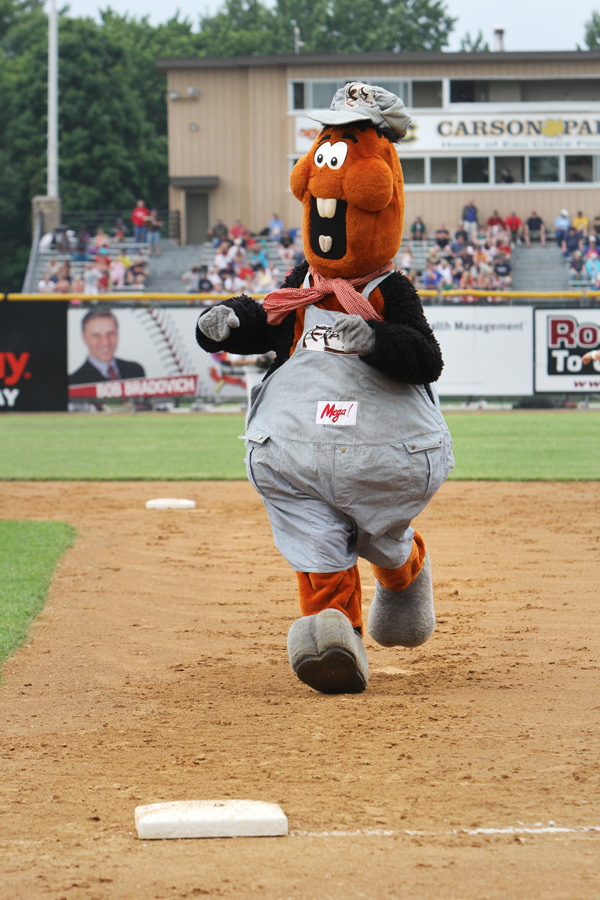 What do you do?
Before the game starts, I change into my costume and then ride out behind center field in the back of a Mule 4 X 4. I throw the baseball out to the pitcher for the first pitch. We do infield games like the dizzy bat race.  We always do the Traxx race with a really little kid. He [Traxx] always loses.  I have to invent new ways to lose every time!  One time I pretended I didn’t hear him say “go.” Another time I tripped on first base. He walks around the stadium and over to the fan deck at least once. One night I counted: I gave 500 high fives, which is weird because he only has four fingers.

How long have you been at it?
This is my second summer being Traxx.

Did being Traxx change your personality?
I dance way more.  People who see me as Traxx can’t believe my crazy dance moves because I don’t act that way in person. I am Traxx at the games. I do talk about him in the third person sometimes.

What are some of the perks of the job?
It’s really rewarding when you’ve got kids hugging you constantly.  Interacting with other mascots is the funniest thing ever. It’s a blast.  It’s like a community of mascots – even if you haven’t met them outside the suit – you really bond because you know exactly what they’re going through.  We have an annual race with the Buffalo Wild Wings buffalo, the Kristo Orthodontics twins, Gibby (Gibson’s water) fish, the Great Clips shampoo bottle….

What might people not realize about your job? I have to walk around slowly, make slow movements.  You have these big feet on. You’re looking out the mouth and it’s this little space you’re looking out of. There is no peripheral  vision. I never take it off during the game because it’s a lot of work to put it back on.  You know that bulge around his middle?  That’s a hula hoop stuck inside the overalls. The costume is really heavy and really hot. I sweat a lot and drink a ton of water.

What is Traxx?
No one knows.  I mean, he’s a train conductor, and he’s definitely an animal of some sort.  I’ve heard bear and woodchuck but I’ve also heard bowling pin and chicken nugget.

What do you do?
We do fish surveys or assessments for lakes, rivers, and small streams in Eau Claire and Chippewa County.  In early spring we throw nets out to capture northern pike, musky, and walleye and we take a little chunk of their fin off to mark them.  We come back at night with the Boomshocker and recapture the fish, counting how many we’d marked before.  It’s better to do it at night because the fish come into shallow water to feed. It’s a big boat – it’s 20 feet long – and it has lights mounted down into the water.  The boat has a mounted generator and two large booms that put electricity into the water.  The fish involuntarily swim toward you; they’re attracted to the electric field and it makes them swim to the top and float there for about 15 seconds. We net the stunned fish and put them in a tub of water to count them.

Is it dangerous?
We’ve got safety mechanisms in our gear, but [injury] is still possible.  We have mats that we stand on, like a welcome mat, but if we fall off, the circuit shuts the whole boat down. And we have a panic button, too. The water and certain parts of the boat will deliver an electric charge.

How long have you been at it?
I’ve been doing it for almost 15 years. It’s a lot of odd hours – days and nights – and in early spring, we get out there as soon as the ice goes out, so there can be snowstorms.

How many people share your job title?
35 people statewide have my job. It’s a fair number, but if you consider we’ve got 15,000 lakes in the state, it’s a fairly heavy workload.

What’s the outlook like for aspiring fisheries biologists?
It’s a tough field to get into. It’s very competitive.  You’ll get several hundred applications for one position. But I get paid for my passion, and it’s very rewarding.

What do people say about what you do?
They think it’s a cool job… a lot of people want to do it.  I get to play with fish. I tell my children “Daddy counts fish.”


What do you do?
I drive the blue bus [though Charles is well aware of the widespread moniker “Drunk Bus,” he prefers “Blue Bus”] or chartered buses on weekends. The reason the boss had started the company was because of a drowning death by one of the students. We needed a way of getting people safely home. The shift usually starts at 8 or 8:30pm for Right Way and goes until 2:30 in the morning.  I really enjoy it.  The riders are very appreciative of the service.  And it is a community service; I personally feel good about what I do.  And we have had trouble, but it’s minimal. We have at times had to kick them off, we have a right of refusal for the service but I’ve only done it once.

How’s your rapport with the riders?
They’re not supposed to be talking to me while I’m driving, but especially on chartered buses, when we stop, we talk.  There is a dance pole in the center of the bus – well, it’s a stripper pole.  But if the riders call it that, I turn around and correct them and say, “That’s a dance pole. That was instituted by the company for health reasons, because dancing is good exercise.”  When they’ve had drinks and they’re loose and among friends, they use it.  But what happens on the bus stays on the bus.

How long have you been at it?
It’ll be a year in January.

How many people share your job title?
About 15.  There are nine buses in the company.  I also work at the University in Information Technologies.  I would say none of the employees work here as their sole source of income. It’s extra.

How does one become a Blue Bus driver?
You have to get your CDL – commercial driver’s license with a P for Passenger Endorsement.

Does anything frustrate you about the job?
I’m hesitant to say… you know, in any job there are going to be things like that.  But I hate it that they can’t use the garbage can… it’s a 40-gallon garbage can, and that’s what it’s there for.

What do people say about what you do?
Some people are appreciative and other people can’t believe you do that all night long.